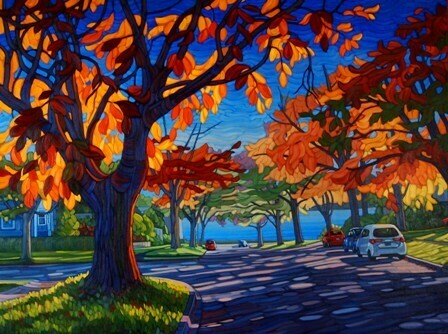 Just dropped this very large painting in to West End Gallery this afternoon.  I had planned to write an "in progress" write up with it, but instead I'd just like to say it's done.  I amaze myself every time I finish a painting and call it done.  It's a huge sense of accomplishment no matter how many times it's happened in my life.  Done, never get bored of signing them and calling them done, very much a high five kinda feeling.

I don't often commit to doing a series but I am thinking I have been in a series of street scenes in my neighbourhood for a while.  Saying I am going to do a series of street scenes is not me.  Saying I think I'll paint street scenes until I break down and must go to a path in the woods again is more me.  Don't commit, just paint.  I enjoy painting the streets of our beautiful city a lot.  This is what I live, this street in the photograph, I drive their almost daily.  We drive it that is, my husband as co pilot, the tour guide actually, tells me where to turn, if he doesn't I panic, where should I turn??  Funny the things we adapt to, eh.  I wasn't able to get out to photograph the essence of fall in Victoria this year.  I may still but I think the tree jewels are mostly fallen and have become that dark sludge on the street.  I'll decide next time the sun shines if it's worth a gathering of 100 photos or so.  I have thousands of photos I plan on turning into paintings eventually.  How old am I?  I better get going...

On the easel now is another scene of fall in Fairfield, smaller, tho.  This giant one (for me) in the above photo was painted on a black ground.  My jury is still out on what ground colour is best.  I'm not certain if the ground is to impact the artist or the viewer.  The viewer doesn't know what ground colour was used, it does get very well covered.  Now, the one I am working on had no ground.  I was in the mood to paint colour directly on white.  I was intrigued by the idea of sketching straight onto the canvas as if it were a piece of paper and I had crayons.  A different experience and I must say, I am enjoying the build up of colour over the white ground.  Love those little pleasing moments that would go unnoticed by everyone else.

So there is my brief catch up since I last posted way back in the summer.  After I finish the painting on the easel right now, I bet I end up in Goldstream again, in spirit, how lucky is that?  Very!